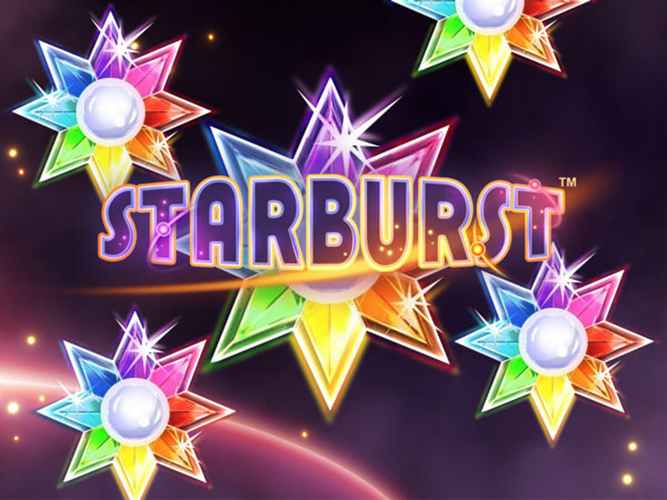 If you have never played Starburst from NetEnt before then chances are that you are not a regular online casino player. Either that or you are based in a region where NetEnt games are not available.

That is because this sparkling game has long been one of the most famous of all online slot games. Copied by many but never equalled, this simple yet satisfying slot game is one of the greatest of all time.

So what is it about this deceptively simple game that has made it such a winner? The game has the traditional 5 x 3 format favoured by NetEnt in the vast majority of their games.

There are just ten paylines, but you can effectively double that number as Starburst is a win-each-way game, meaning that it pays from right to left as well as left to right.

You are playing for a jackpot of 50,00 – unexceptional, although you would certainly be celebrating if you won this amount. This is a low variance game so you should expect lots of small wins to come your way.

Autoplay is the preferred option to go with on this game, just make sure that you don’t exceed your bankroll limit.

Visually Starburst remains an impressive game, even though it was released a few years ago, in 2013. There are just seven different symbols on the reels of this game.

The last named pays out 250 times your line bet when five appear on a payline.

The game is set against what looks like a space-age backdrop, and the different jewels shine and sparkle when a winning combination is formed. One of the most effective aspects of this game is the perfectly judged soundtrack.

It makes for a perfect accompaniment to the game with its futuristic beats. And when a win is scored it cranks up the volume to celebrate.

Star of the Show

Slot gamers love a bonus round, particularly a free spin bonus where they can really take advantage of the best opportunity to score big. Starburst does not have a separate screen bonus, and there are no traditional free spin games. So given that, why is this game still so incredibly popular?

This game is called Starburst, and the multi-coloured starburst symbol is the one you really want to see on your screen. Three of these can appear to cover either of reels two three or four at any time.

When this happens, the Starburst reel acts as a wild symbol and you will get one automatic free re-spin. Should another Starburst appear then both reels remain wild and there is a further re-spin.

If the dream scenario happens and you get a third, then sit back and wait for what could be a very lucrative final re-spin. Each time the starburst appears it is greeted with dramatic music to really amp up the excitement.

There is not much else to this game apart from what we have described above. It may seem pretty ordinary, but once you start spinning those reels you will realise that this game is anything but ordinary.

Any casino which offers NetEnt games will have Starburst prominently displayed in its lobby. In fact, for many years Starburst has been the number one game in terms of how many casino lobbies this game appears in.

Any time you are offered a free spin bonus from a NetEnt casino, you can bet that Starburst will be one of the games you can use these free spins on.

Slot players just love this beautifully designed game and nobody else has quite been able to beat it over the years.