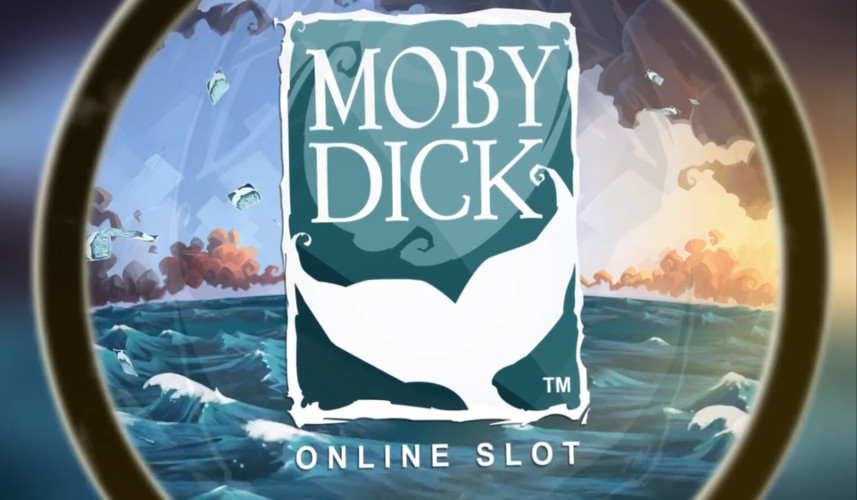 Moby Dick is a novel which tells the story of a sea captain obsessed with catching and killing a giant white whale. This slot game from Rabcat (in association with Microgaming) takes its inspiration from that story and brings it to the world of online gaming.

Place your bets from 25c all the way up to €50 and start spinning those reels. Choose the amount which suits your pocket by using the up and down arrows next to the Stake button.

This is a standard format game with the traditional 5 reels and 3 rows. Rather than hunting whales, players will be trying to harpoon an alluring jackpot of 250,000 coins.

The return to player of 96.15% means that even if Ahab never landed his prize, you can expect some good returns from this game.

The first thing to say about the Moby Dick slot is that it looks visually stunning. The reels spin in front of an ocean backdrop, with Ahab standing on the prow of his ship, harpoon in hand.

The ship bobs up and down on the waves, while the wind snaps the sails to attention.

On the actual reels, the lower value symbols consist of the traditional playing cards from 10 to A.

The higher value symbols are a little more interesting and include beer tankards, an anchor, Captain Ahab and of course the great white whale that gives this game its name.

Get a winning combination on any of the 25 paylines and the winning symbols are nailed into place. An automatic free respin takes place, hopefully allowing you to add to your initial win.

As long as extra winning symbols are added, those free respins keep going. The wooden steering wheel symbols will help to boost those winning lines, as these symbols are wild in this game.

Swallowed by the Whale

The scatter symbol is the gaping mouth of the great white whale, Moby Dick. You need to find at least four of these to unlock between 10 and 20 free spins. It is possible to have seven free spin symbols on the reels at the same time to get the maximum amount of spins.

This may seem an impossible task, but luckily the same frozen symbol feature kicks in when you have at least three scatter showing on the reels.

The free spins round is announced by a dramatic animation where the boat is smashed by Moby Dick rising from the depths. The giant whale’s mouth opens and Captain Ahab is swallowed whole.

A new screen shows the inside of the whale’s mouth, and now your free spins feature wild reels to help you to accumulate those wins.

One final extra feature offered by Moby Dick is the nicely animated gamble feature. Older games tend to feature a boring high/low or red/black card game where you can double your win or lose the lot.

Here you choose between two mugs of tea: select the tea-bag and double your money, find the fishy skeleton and your cash disappears. You can gamble up to a maximum of five consecutive times if you are really feeling lucky.

This slot is one of the best looking that you will see, even if the theme of whale hunting may not be one that many people embrace in this day and age.

The game was released in 2017 but unfortunately did not make the impression on players that the developers hoped, sinking to the depths within months of its launch. However, maybe now is the time to rediscover this stunning slot game.

Moby Dick is one of the best looking online slots out there. Now is the time to discover this stunning slot game.