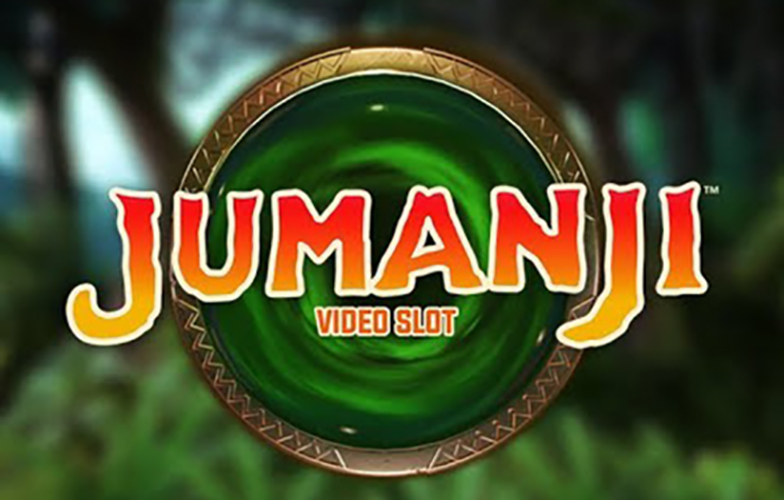 Jumanji was an adventure movie from the mid-nineties featuring a magical board game which managed to release wild animals into the suburban neighbourhood where the game was being played. The movie was a smash hit, as was its 2017 sequel which took more of a comedic approach to the subject matter.

This 2018 slot game from NetEnt aimed to capitalise on the success of that sequel starring Dwayne Johnson and Jack Black.

The game layout is different from the standard NetEnt games. Here the reels are arranged in a 3-4-5-4-3 pattern instead of the normal 5 reels with 3 rows. We can see the board game from above, laid out in an apartment with monkeys peering at it intently. By selecting the level and coin value you get to choose your per spin bet. This ranges from just ten cents all the way up to a high rolling €200.

The Autoplay function lets you spin those reels up to a thousand times if you wish. The jackpot is a mere 28,000, but with all the features on offer from this low variance game, it is certainly worth playing this version of the famous Jumanji game.

Although this game has been inspired by the 2017 movie it does not feature any of the characters, which is a pretty big disappointment. So instead of the Rock and Kevin Hart, we have to make do with standard playing card symbols and wild animals making up the higher value symbols. These animals are the pelican, crocodile, rhino and lion.

While it is a shame that the game developers couldn’t get the rights to use the actors’ images, this game has enough extra features to compensate. One of these is the Sticky Vines feature, where winning combos are wrapped in vines and an automatic respin occurs.

The second of four features which can randomly occur in the main game is Monsoon Wilds. In this case, a snapping croc leaps from the reels only to fall back and fill one reel full of wild symbols.

The special features don’t end there! Monkey Mayhem can kick in at any time to rearrange the symbols after a spin so as to provide a guaranteed win. Finally, the Wild Stampede feature can randomly occur, causing a horde of rhinos to trample across the reels.

They leave between four and nine reels behind them on the reels. So many features and we haven’t even gotten to the bonus round yet. Let’s see what magical features are unlocked when that bonus game begins.

When three or more scatter symbols – the Jumanji board game – show up anywhere on the reels the bonus board game round begins.

Choose a token and spin the two dice to determine how far you move. If you got three scatter symbols you have earned 6 dice rolls, with 7 rolls for 4 scatters and 8 rolls if you found all 5 of them.

Free spin features are located on each corner of the board game and you activate these when your token lands on the relevant square.

There are four different free spin squares, each one related to the features in the base game. Apart from these, there are three more squares you could land on.

Welcome to the Jungle

Roll the dice and your token moves around the board. There are numerous coin value multipliers and extra roll symbols to collect as you go on your journey. There is also a mystery space where you can win either coins or more rolls of the dice.

Of course, you are really hoping to land on one of the four corners where those magical free spins await. When you land on Vine Free Spins you will earn 10 free spins with Sticky Vines always active. The Monsoon

All of those extra features lift Jumanji above the normal slot game and into a very special category of its own. It may not bear much resemblance to the hit movies, but this slot game is worth playing for those wild and crazy features that keep the excitement levels high.

Jumanji is unlike any other video slot. We can definitely recommend this slot to all thrill-seekers.