How to Play Roulette

By Sophia MathisonNovember 28, 2018No Comments

Roulette is one the of the world’s most popular casino games, enjoyed from Monte Carlo to Las Vegas. Despite being Incredibly simple in its design, the different elements of roulette come together to form something undeniably glamourous and exciting.

In its current form, roulette is thought to have been played for the first time over 200 years ago in Paris. The word ‘roulette’ is French, meaning ‘little wheel.’

Despite having grown into the casino stalwart it is today, the roulette wheel was not originally designed as a game at all. In fact, historians believe that the first roulette wheel was built by Blaise Pascal, a French scientist. His intention?

To develop a perpetual motion machine.

Pascal may have failed in this endeavour, but roulette has steadily grown in popularity in the years since. Today, his ‘little wheel’ is arguably the most iconic gambling icon in the world.

Fun fact: If you add up all the numbers (0-36) on the roulette wheel, you get a rather interesting result:

Legend has it that Francois Blanc, the man credited with establishing the very first casino in Monte Carlo, sold his soul to the devil in return for the secrets of roulette.

There are two main variations of roulette: 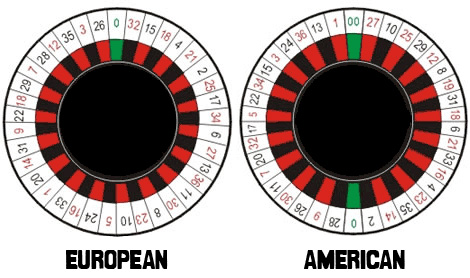 These games are very similar, but there’s one key difference:

European roulette wheels – which you’ll find in most European casinos – have a single ‘0’, while American wheels – found in (you guessed it) casinos across the US – have a ‘0’ and a ‘00’.

Here’s an example of the two side by side: 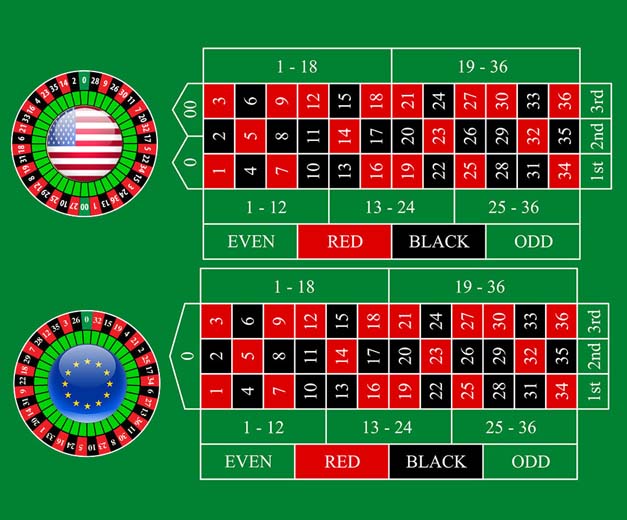 As you can see, the tables (known as layouts) look incredibly similar, but this small numbering difference is actually extremely important. Why?

Because the green zero slots represent the house edge. Without them, the game would be completely ‘fair’, meaning gamblers would be just as likely to beat the casino as vice-versa.

The extra slot (‘00’) on an American roulette wheel therefore further tips the scales in favour of the house, meaning over time, you can expect to win less (or lose more) money if you’re playing on an American table.

When playing roulette online, never opt to play on an American-style table. You aren’t in Vegas, which means there’s no reason not to seek out a European-style table that will increase your odds of winning.

Beyond the two main variants, you’ll find a sprinkling of other options.

Perhaps the most famous of these is French roulette, which is almost identical to the European version except for one thing:

This rule further decreases the house edge by returning 50% of a player’s stake on an even money bet if the result of the spin is zero.

Say you bet £10 on red. The wheel is set in motion and the ball let loose, eventually coming to a stop in the green ‘0’ slot.

In most forms of roulette, you just lost your money. But with the La Partage rule, you’ll receive half your stake – £5 – back.

Some versions of French roulette also include the ‘en prison’ rule (a variant of La Partage), which allows players to opt to place their even-money stake ‘in prison’ when a spin lands on zero. This allows the stake to stay on the table until the next spin. If the bet wins on the following spin, the player’s stake is returned.

As you might have guessed, French roulette gives players the best odds of any of the more commonly played forms of the game (when making even money bets, that is). If your online casino of choice offers French roulette, this is the place to play.

Check out Casino Room or Guts Casino if you want to give French roulette a try.

To the uninitiated, betting on roulette can be confusing, and even a little daunting.

We’ve got you covered with a comprehensive guide to all the different kinds of bets you need to know about. The two most common types of bet – available in all variations of the game – are known as ‘inside’ and ‘outside’ bets.

Here’s a rundown of the different kinds of bets. Use the numbered poker chips in the image to see how to place them on the layout (either online or in a physical casino).

The first thing you’ll notice is that the inside bets are by far the highest risk, highest reward bets available on a roulette table.

Outside bets, on the other hand, are much less risky, but the payoffs are smaller compared to inside bets.

In general, players looking to spend a long time at the table might want to focus on outside bets, where wins will be small but frequent, and big losses can be kept to a minimum.

Inside bets can also be great fun, but there’s a higher chance you’ll dwindle away your chips more quickly through consecutive losses if you focus on these kinds of bets.

Again, it’s worth reiterating that the house edge on American-style roulette wheels is higher than on European-style tables, so if you have the option, always opt to play on a European table, seeking out French variants if available. 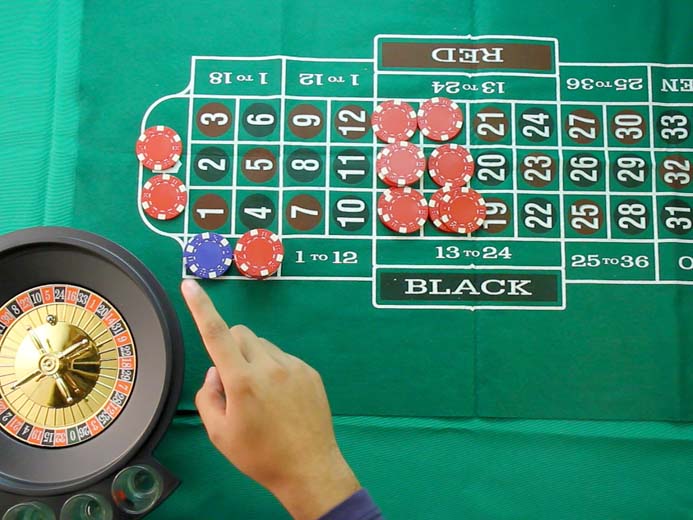 Type ‘winning roulette strategies’ into Google and you’ll see thousands of results returned, including a whole bunch of pretty shady sites claiming to offer systems capable of beating roulette (for a price, of course).

So, is that really possible?

The short answer is: Wait for it… …No. Sorry.

Assuming the roulette wheel is indeed completely random (and if you’re playing online at a reputable casino, it certainly will be), then it isn’t possible to beat the house consistently. It’s a mathematical certainty that – given enough time – the house will win. That’s how casinos stay in business, after all.

But that doesn’t mean you can’t score a big win in any given play session – you just need a bit of luck on your side. So how about these ‘systems’ people claim can beat roulette – what’s wrong with them?

Most are based on something called the ‘gambler’s fallacy,’ which is the name given to the assumption many gamblers have that previous results (numbers that have come up, in the case of roulette) have an impact on future ones.

If red has come up on the last 10 spins, those suffering from the gambler’s fallacy would believe that the 11th spin is more likely to come up black. This is not the case!

Perhaps the most famous roulette strategy of them all is known as ‘the Martingale.’

Here’s how it works:

You pick an even money bet (say, red or black), and you make an initial, low stake bet – call it £1. If that bet loses, you double your stake and try and again, continuing this pattern until you make a winning bet. After a win, you go back to the beginning, betting £1.

It’s literally as simple as that.

Now, pull out a pen and paper and do some quick maths and you’ll start to see why some people get sucked into this betting system. If you double your bet after each loss, an eventual win will cover all your losses, plus a win equal to your original stake (in our case £1). In fact, you’re guaranteed to win at roulette if you follow this strategy.

There is, however, one little drawback:

The Martingale is only guaranteed to work if you have infinite wealth. Which of course… nobody does.

You see, sooner or later (and probably sooner than you think), you’re going to end up on a losing streak. And when you do, your bets will quickly get out of hand (or more likely, hit the table limit). Your bet size grows exponentially with every loss, so it only takes one unlucky streak to wipe out everything you have.

Think an ‘unlucky’ streak is really unlikely to occur in a 50/50 game? That’s where you’re wrong.

The highest recorded sequence of consecutive ‘reds’ coming in at a roulette table is 32 at a casino in the US. (Yes, 32!). But even smaller streaks of 5-10 in a row are much more common than most people would intuitively believe. Hit one of these while using the Martingale and you’re in deep trouble.

So, what’s the best strategy to win at roulette? There isn’t one!

The best way to play roulette is to set aside how much money you want to risk in total, then spin away, enjoying the highs and the lows. If you do manage to hit a big win, great – cash out your chips and be on your way. If you end up losing your money, that’s OK to. You didn’t spend more than you planned to, and you had fun at the table.

Anything else to bear in mind?

If you want the session to last a little longer, stick to outside bets and keep your stakes manageable. If you don’t mind a shorter session for the chance of bigger wins – try your hand at some inside bets. It’s one hell of a thrill when your number comes up, that’s for sure.

The key is to remember to have fun and not go chasing your losses.

OK, so we’ve already established that you can’t beat a truly fair roulette wheel – one where the outcome is completely random.

…But what if the wheel isn’t fair?

We’ll start right out by saying that these days, it’s incredibly unlikely you’ll ever find an unfair roulette wheel. Modern wheels in physical casinos are precision-made tools, and any defects that might occur would be picked up on very quickly.

You’ve even less chance, with results coming right out of a random number generator. That’s essentially a bit of software specifically design to be completely without bias, making the roulette wheel it powers effectively ‘unbeatable’ in the long run.

But there have been cases where canny gamblers have managed to spot a faulty wheel early enough to profit. It’s said that, back in the 1870s, a man called Joseph Jagger won an incredible £120,000 (the equivalent of about £12 million today!) playing roulette in Monte Carlo.

Mr. Jagger was a ‘wheel watcher’, someone who studies roulette wheels in the hopes of finding one that displays a certain bias. The story goes that Jagger spent several days watching the roulette wheels in Monte Carlo before identifying one he concluded was ‘predictable’ and backing it heavily.

We’ll never know whether he really did find a faulty wheel, or if he just got lucky. You’ve got to admit, it’s a great story though! 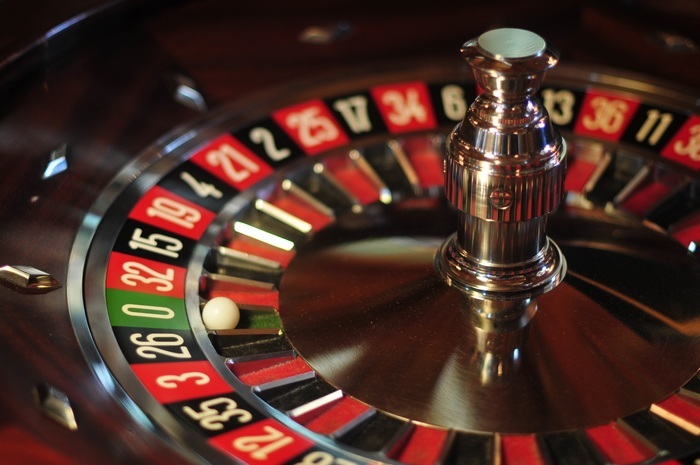 A few spins of the roulette wheel can make for one of the most thrilling experiences casinos – whether physical or online – can offer. There’s nothing quite like those few moments of anticipation when your chips are down, and the ball begins to fall towards the track.

It’s a heart-pounding experience, and with a relatively small house edge – particularly if you find a French roulette table – why not try a few spins and see how you get on?

Just remember to set strict limits and stick to them!

Click here to assign a widget to this area.