How To Play Blackjack

By Justin WilliamsonNovember 28, 2018No Comments

Wander around any casino in Las Vegas and you’ll find yourself confronted with a huge variety of games, from jingle-jangling slot machines to whirling roulette wheels. There’s so much to choose from it can be difficult to know where to start.

But among all these games, only one can boast the title of having the lowest house edge of all. And which is that, you ask?

In fact, depending on the variation you’re playing (and a few optional rules), the house edge in Blackjack can be as low as 0.28%. It’s for this reason alone that Blackjack has long been the card-counters game of choice (more on that later).

Blackjack is a long-lived game. In fact, games much like it have been played for over 500 years. But despite its long history, not many people know where the name ‘Blackjack’ actually comes from.

Here’s how the story goes…

When the game was first introduced in the United States, casinos were keen to encourage new players to give it a try. As a result, they came up with a promotion in order to bring players to their tables.

By the rules of the promotion, casinos would pay out at a staggering 10-1 whenever a player’s hand consisted of the Ace of spades and a blackjack (either the jack of clubs or spades). This hand was known as a ‘blackjack’, and although the generous promotion has long since been discontinued, the name has stuck around. 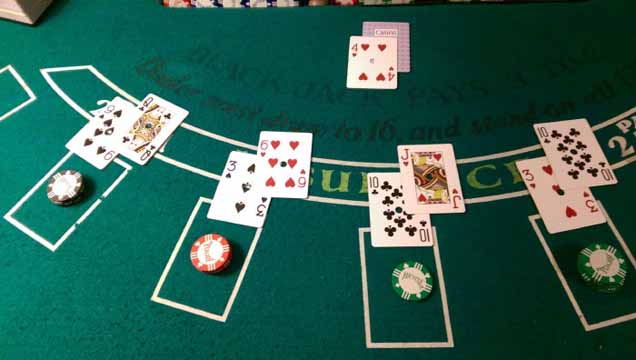 Spend any time sitting at a Blackjack table with novice players and you’ll probably hear someone say, “The aim of Blackjack is to get as close to 21 as possible.

The aim of the game in Blackjack is actually much simpler than that:

To beat the dealer!

The sooner you can get this idea into your head, the sooner you’ll improve your Blackjack game. Depending on the dealer’s card, it may be correct (according to basic strategy, which we’ll discuss later on in this guide) to ‘stand’ on a total as low as 12 – something you won’t find many novice players doing when trying to get close to that magical 21.

So, about those rules…

Blackjack can be played with between one and eight 52 card decks. Aces can count as either 1 or 11, face cards count as 10, and the rest of the cards (2-10) are worth the value shown on the card.

At the beginning of each round, players place their bets in the ‘betting box’. When the bets have been placed, the dealer deals two cards to each player face up, and two cards to himself, one face up and one – the hole card – face down (except in ‘no hole card’ variations, when the dealer’s second card is not dealt until all players have acted).

Action begins with the player sitting to the dealer’s left, and the following player choices are available:

After each player has acted, the dealer will play their own hand. The dealer will draw cards until they have 17 or more points, at which point they will stand (or bust, if they have gone over 21). By some variations, the dealer will also hit on ‘soft’ 17 – a total of 17 points including an ace.

If the dealer busts, any player who has themselves not busted will win. If the dealer doesn’t bust, players with a higher points total than the dealer will win. In the case of a tie, the result will be a ‘push’, meaning no money changes hands, and the player’s stake will be returned.

The pay-out in Blackjack is even money unless the player hits a natural ‘blackjack’ (a total of 21 points with their first two cards), in which case the payout is 3 to 2.

Pro tip: these days, some casinos are reducing the payouts for natural blackjacks. If possible, avoid playing on these tables, as this rule serves to increase the house edge. 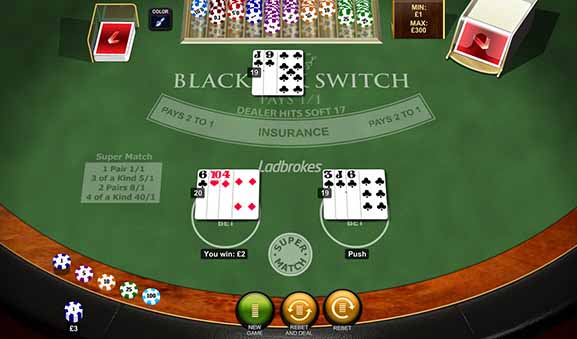 This variant hasn’t been around for long, having been invented in 2009 by a chap named Geoff Hall.

In Blackjack Switch, the dealer deals each player two hands, and players are able to ‘switch’ the top two cards between each hand.

In Double Exposure Blackjack, both the dealer’s cards are visible from the start, giving players a good deal more information on which to base their decisions.

In order to maintain a house edge, there are a few other tweaks to the rules used in this particular variation:

Natural blackjacks pay evens instead of 3:2, and the dealer wins in the case of a tie (instead of a push). Some casinos also restrict doubling down and splitting to boost things further in favor of the house.

In this version, owned by Masque Publishing Inc., a gaming company from Colorado, the game is played with six or eight Spanish decks, which contain only 48 cards (like regular 52 card decks, but with the 10s removed).

Many people think that Spanish 21 rules are less favourable to the player. Indeed, removing the four 10s from the pack does increase the house edge by some 2%.

But wait, not so fast…

Additional rules that reward the player in other ways mean the overall house edge in Spanish 21 is actually lower than it is in traditional Blackjack. 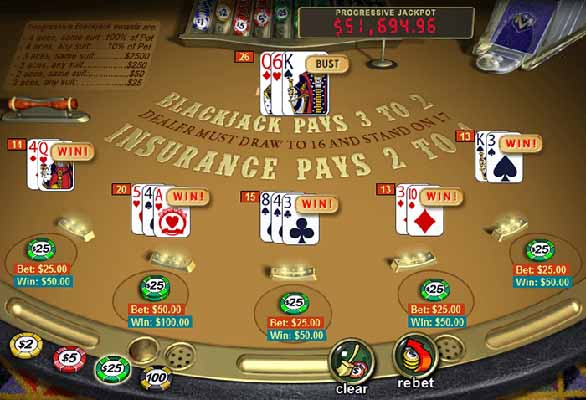 This variant plays out just like traditional Blackjack, except an additional side bet is placed that goes towards a progressive jackpot.

This side pot pays out when the player is dealt a certain hand, such as one including an ace. The full jackpot is usually paid to a player dealt 4 aces of the same colour, often snagging a huge win.

This may sound great on paper, but in reality, the house edge of the progressive jackpot is very often huge.

As a result, while this variant can be a lot of fun, we don’t recommend it for serious players.

When it comes to mastering Blackjack, there’s only one place to start:

Blackjack is not like poker, where any number of player choices may turn out to be ‘correct’. In Blackjack, there is always a ‘right’ and ‘wrong’ play. Players who utilize basic strategy essentially play perfect Blackjack based on the probabilities presented by each hand they (and the dealer) are dealt.

The process is very simple. Each variety and ruleset of Blackjack is associated with its own unique basic strategy that informs players of the ‘correct’ play in every circumstance. The strategy is usually presented in tables, much like the following: 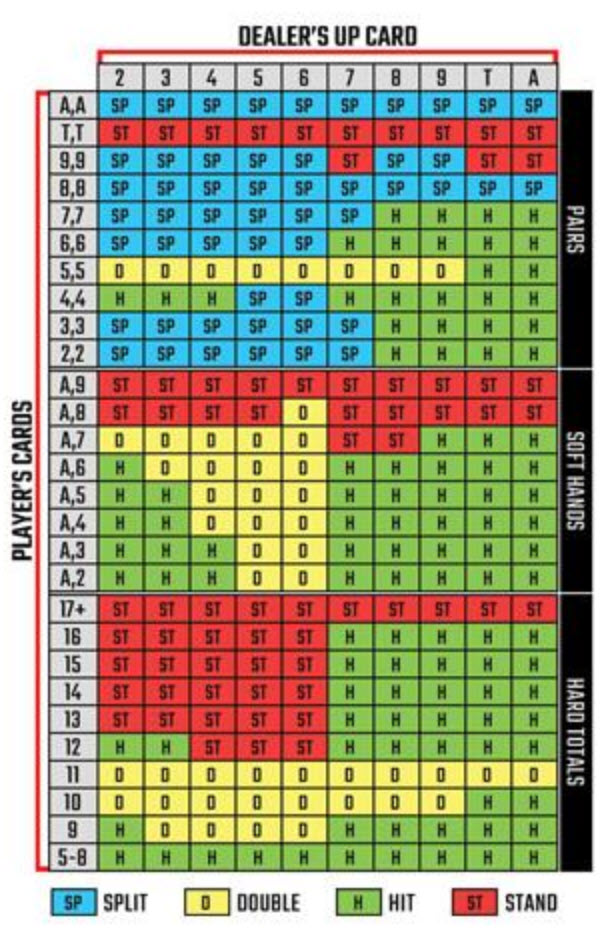 These tables are easy to use, and by following the instructions for each hand, Blackjack becomes an (almost) even contest between player and dealer.

To use the basic strategy tables, compare your hand (listed vertically) with the dealer’s card listed horizontally). The intersection of these rows/columns will tell you how to play the hand – whether to hit, stand, split, double, or even surrender.

As a quick example, imagine the dealer is showing an 8, while you have been dealt a 5 and a queen. What should you do?

Using the basic strategy table, we can see the player should take another card in this situation.

It’s really that simple. And the best bit?

There’s nothing to say players can’t bring their basic strategy card to the table with them! So long as you’ve printed out the card (and it isn’t, for example, on your smartphone), it’s perfectly OK to refer to the card as you play.

Note: some of your fellow players (or even the pit boss) may begin to complain if you spend too long referring to the chart, so do try and be fairly quick about it. Still, once you’ve mastered how it works, this shouldn’t be a problem.

Different rulesets require different charts for ‘optimal’ play, so be sure to use the correct basic strategy for the version of the game you’re playing.

Now then… we’ve learned that by playing optimally based on the dealer’s cards and our own, we’re able to bring the house edge down far enough to make Blackjack a fairly even game.

Having said that, if you play for long enough, even a house edge of a measly 0.28% will see you lose out to the casino.

But what if there was a way to turn the tables in your favor? After all, the basic strategy is based on probabilities that assume the next card in the deck is totally ‘random’.

That’s where counting cards come into it.

Anyone with even a passing interest in casino games has probably, at one time or another, heard of the concept of counting cards.

But what does it actually entail?

Well, it’s really quite simple. Card counting is a way of gaining an advantage against the house in games like Blackjack through a process of tracking which cards have been played – and therefore which cards are most likely to come up next.

Over the years, card counters have consistently managed to ‘beat’ Blackjack through several ingenious methods which allow them to swing the odds in their favor by accurately gauging the distribution of high/low value cards remaining in the deck.

But why is this important?

Well, when playing Blackjack, high cards are (on average) more beneficial to the player than the dealer. Why?

For several reasons, including:

A common misconception among non-counters is that card counting requires incredible feats of intellect, memory, and brainpower. But is this really the case?

Most card counting techniques are really very simple, involving the assigning if a positive, negative or zero value to each card value. When that card is dealt (to any player, or the dealer), a running ‘count’ is adjusted. In general, low cards increase the count, and high cards reduce the count.

This gives the player an idea of when the odds are tipping in their favour through an increased density of high-value cards remaining in the shoe. At this time, the player will increase their bets significantly to cash in. Likewise, when there are a higher proportion of low-value cards left in the shoe, a card counter will reduce their bets to minimize loses.

Of course, these days, gaining an edge over the casino by counting cards isn’t quite so straightforward. That’s because many (perhaps all) casinos have introduced countermeasures to undermine card counting techniques, such as increasing the number of decks used and increasing the shuffle frequency. Many will even go so far as to monitor the ‘count’ themselves (using specialized software), looking for correlations between the count and player bet sizes to help spot counters.

So, is card counting actually illegal then?

Nope. So long as you’re only using the power of your brain (and not some external device), card counting is perfectly legal. However, if a casino suspects you of counting, they will most likely ask you to leave, probably blacklisting you in the process.

Still, many card counters ply their trade to this day, coming up with ever more ingenious ways to beat the house. 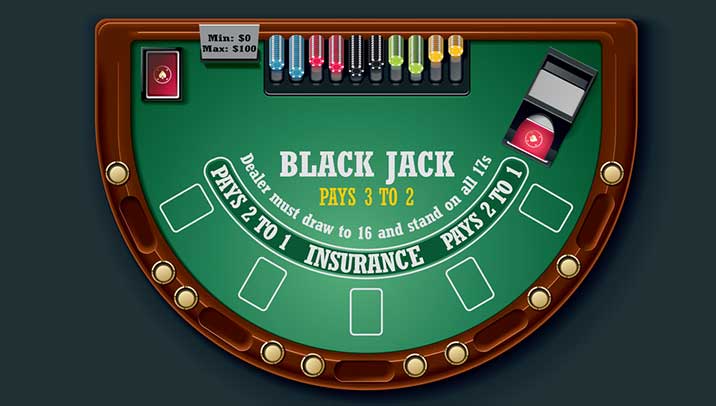 Blackjack has long been one of the most interesting and highly-studied of all the games available in casinos today. That’s because the house edge is so tiny that perfect play – and a few sneaky tricks and techniques – can see savvy players beating the house on a regular basis.

It’s incredible that such a simple game – one that’s so easy to pick up and play – can remain so fascinating for so many years. Perhaps it’s because whether you’re just looking sit down at a table for an hour and follow your gut, or you’re ready to put in the hard work to memorize basic strategy and a host of card-counting techniques, there’s fun to be had here for everyone.

Click here to assign a widget to this area.