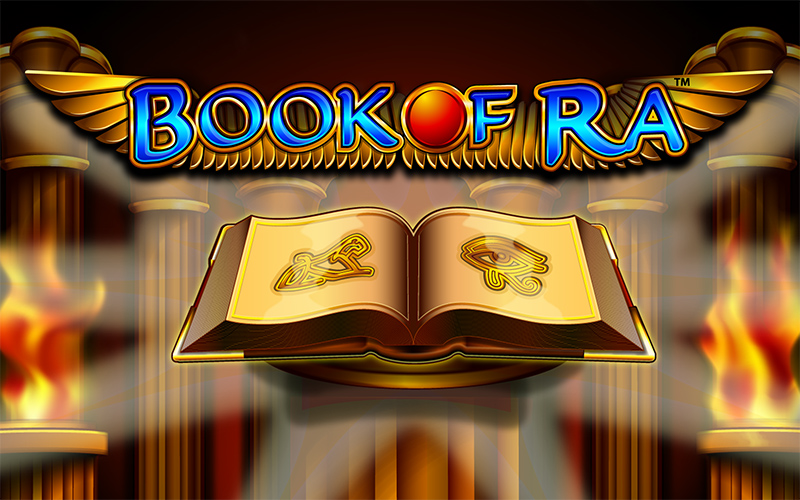 Book of Ra from Novomatic is probably one of the most famous slot games in all of the world. It can seem like every bar or café has a machine in a corner where this game is available.

Does this mean that it is one of the best games in the world? Well, let’s see what we discovered. The game is a classic Novomatic/Green Tube favourite that has made a very successful crossover from physical slots to the online world.

Novomatic has got millions of fans around the world and is particularly loved in continental Europe. The online version of Book of Ra was created all the way back in 2005.

It has spawned countless sequels, such was its popularity. This is a 5 x 3 reel game, but modern slot gamer may well be dismayed to discover that there are only 9 paylines.

The jackpot is an unexceptional 50,000 coins, which is modest in today’s terms. Book of Ra is a medium variance game, so expect a reasonable supply of wins to come your way.

Your bets can range from £0.45 all the way up to £90 per spin, so make sure you choose an amount that suits your bankroll. There is also an Autoplay option to keep those reels spinning for you.

This slot game can claim some of the credit for the ongoing popularity of games with an ancient Egyptian theme. Book of Ra features an Indiana Jones style main character which serves as the largest value regular symbol.

Find 5 explorer figures on a payline to earn 2500 times your bet. The other symbols are the standard 10 to A playing card symbols – nothing special there. There is also a jewelled scarab, a golden Isis and a gold sarcophagus to find on the reels.

In fact, gold is definitely the dominant colour here. Clearly, we are supposed to be thinking about the golden fortune which this game could potentially bring if those symbols fall into the right places.

Opening the Book of Ra

We have not mentioned the Book of Ra yet, but this is the dominant symbol in the game as a whole. This special symbol has a higher value than all of the others in the game except for the explorer and the golden sarcophagus. Find 5 books on a payline and you will earn 900 times your bet.

Apart from its high value, the Book of Ra also serves as the wild symbol in this game. That means it can replace all of the other symbols in the game. As you can see, it is certainly a useful symbol to appear on the reels.

More Secrets of the Book

The Book of Ra has one more function, which is as the scatter symbol for this slot game. Find three or more of these anywhere on the reels and it is good news for your coin balance.

This is because you will unlock ten free spins which is where you can start to uncover some of that Egyptian gold.

At the beginning of the free spins game, one symbol will be randomly selected within the pages of the book. This special symbol can now expand to cover three spaces on the reel.

The special symbol pays just like the regular version of this symbol except now it does not need to be in a line or on adjacent positions. The special symbol will only expand if it means that this will enable it to form a winning combination.

Exploring the Book of Ra

Chances are that you have already formed your own opinion of Book of Ra. Regular offline slot gamers will certainly have spun these reels more than a couple of times. But is this game still worth exploring now that it is practically an ancient relic itself?

Unfortunately, time has taken the gleam out of this once golden slot game. There are some people who will continue playing Book of Ra for as long as it stays online, and the best of luck to those players.

However, to modern eyes, this classic game is beginning to show its age. The graphics are looking a little bit dated, even though as they were ahead of their time when the game was released they are not as old-fashioned in appearance as with games of a similar vintage.

Whatever about the graphics and animations, Book of Ra commits one sin which is just about unforgivable. There is a miserly return to player of just 92.13% if you are playing the UK version of this game.

Elsewhere in the world, the return is a little better at 94.26% but that is still well below the average for a modern slot game. The overall gameplay just cannot compensate for the fact that this game is harder than most to make a profit from.

Fans will always love it, but Book of Ra will not be a favourite of most modern gamers.